By NDP Socialist Caucus
Posted October 31, 2021
In Uncategorized
CUPE NB: Province-wide job action is the only way left for us to be heard2021-10-312021-10-31https://ndpsocialists.ca/wp-content/uploads/2015/11/Socialist-Caucus-Logo.pngNDP Socialist Caucushttps://ndpsocialists.ca/wp-content/uploads/2021/10/cupe-nb-province-wide-job-action-is-the-only-way-left-for-us-to-be-heard.jpg200px200px

CUPE New Brunswick members are ready to strike. We don’t want to be in this position, but here we are. I would like to share our view of the history leading up to our strike position.

We are in a struggle for social and economic justice. This is a fight to protect the workers who provide essential services to the people of New Brunswick.

Over the past 50 years, the billionaires and the super-rich were successful in eliminating a lot of private sector jobs in North America. These were good paying unionized jobs, and they were relocated to countries of the Global South where the billionaires could pay workers less, give poverty wages and few if any benefits, and conduct their business with very little to no regulation or regard for the environment. Of course, they were also paying next to no taxes.

Once they decimated the private sector, the billionaires turned their attention to the public sector. They created a new fiction, called austerity. The shorthand definition of austerity is the deliberate creation of federal, provincial and municipal deficits, while corporations and the super-rich pay less and less taxes yearly, resulting in obvious revenue shortfalls and manufactured budget crises. I recommend reading Jane McAlevey to learn more about this.

Austerity has become common in most western countries. The gap between the rich and the poor, and social and financial inequality, is worsening.

In New Brunswick, we have endured 20 plus years of austerity. Public services have been severely reduced, thus eliminating our healthcare and social safety net and putting it in a state of perpetual crisis. We have some of the highest rates of early childhood poverty in Canada. We have a crumbling health care system. And this was happening before the pandemic crisis.

We now have a working class, both private and public sector, unionized or not, that are not able to pay their bills. They’re living from paycheck to paycheck, some having to work two or three jobs or to rely on food banks to feed themselves and their families.

We are facing unprecedented times with ever increasing inflation. It was reported a few weeks ago that at this point, inflation is at 5.1% in New Brunswick. So, groceries have increased 10% in the past year, and rents are going up, in some instances up to 50%. Home tax assessments are going up on average 7%, and in many cases much higher. Home heating fuel is almost 50% higher this year as compared to last year. Gas is increasing at an unprecedented rate. This list goes on and on.

The only thing that is not going up in New Brunswick is our workers’ wages. These wages keep our local economies going. The wages help these families pay for and address their needs.

The attacks on workers’ rights and benefits have reached a tipping point. These attacks are undermining the social safety net that all citizens deserve. Workers around the world are fed up and they’re starting to stand up and fight back. In our neighbors to the south, more than 100,000 workers are currently taking job action, and they’ve had many, many strikes in the past two or three years because they are demanding fair compensation and dignity and respect.

Workers are tired, fed up and very angered. Many workers are quitting their jobs. They’re retiring early if they’re able to. They are done and they’re refusing to be bullied. They’re tired of working harder and harder and going further and further behind. They are tired of the poor working conditions, of being undervalued, overworked and underpaid, and many workers are starting to stand up for themselves. And that is what has brought us to where we are today.

Our workers have been putting their lives on the line day in and day out throughout the pandemic. They are caring. They are compassionate people who simply want to provide the best quality public services and make a decent living so they can take care of their families and have some type of a quality of life.

The current government has been very misleading and untrustworthy. They continue to frame this labour unrest as the big bad union is greedy and out of step with its workers and with the citizens of New Brunswick. And the government continues to say that the province is broke and can’t afford to pay its workers a fair wage so that these workers can make a decent living. Well, we all know that’s not true.

The news reported recently that there’s been four consecutive surpluses in this province to the tune of over $400 million. We have 10 locals representing 22,000 workers who voted overwhelmingly in favour of job action, because the government refuses to provide them decent wage offers. Workers have had 20 years of stagnant wages and going further and further behind under austerity programs.

So, we need to find ways to push back against this austerity.

New Brunswick public sector workers are tired and angry, and they have every right to be. The Premier seems determined to create and maintain a low wage economy, regardless of the cost to workers and citizens.

Higgs’ attack on frontline workers has pushed us into a corner. Province wide job action is the only way left for us to be heard, taken seriously and treated fairly. 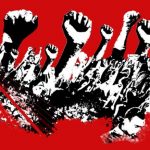 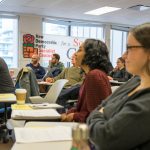