The PM has always been more about style than substance. From his claim to being a ‘feminist’, while ditching national childcare and proportional representation, to his distant goal of carbon gas emissions reduction as he invests billions in oil and gas pipelines in the here and now, Trudeau tries to camouflage his commitment to the profit system with ‘positive’ symbolism.

Simon, the 74-year-old former diplomat, negotiator and CBC broadcaster, was born in Nunavik. She fills the shoes of disgraced GG Julie Payette who resigned in January over accusations of bullying her staff at Rideau Hall. For the Liberal government it is a chapter best forgotten, now exceeded by the deep shame of the discovery of thousands of unmarked graves of Indigenous children who died in the brutal government-funded, church-run Residential Schools. How better to change the channel than with the persona of an outspoken Inuit woman?

Many Indigenous people take pride in Mary Simon gaining the highest ceremonial post in the Canadian state. After hundreds of years of insult, physical violence and oppression, it is understandable that the dispossessed derive some vicarious satisfaction from the appointment of one of their own.

But at what cost? The Vice-Regal office represents the arch-patriarchal, elitist British monarchy. Moreover, it serves an avaricious Canadian colonial-settler capitalist state. Putting a gloss on evil hardly changes its inherent class content.

All the talk of potential top-down ‘healing’ by Simon is couched in relentless reminders that the role is strictly ‘non-partisan and apolitical’. Cindy Blackstock, executive director of the First Nations Child and Family Caring Society, nailed the contradiction: “…if you’re not able as the Queen’s representative to speak out against social injustices, economic injustices and others, then other than doing ceremonial duties, what is the purpose of this?”

The evident purpose is to burnish the image of the government atop a colonial settler state while tending to duties that include: swearing-in cabinet ministers, delivering the Speech from the Throne, granting Royal Assent to bills so they become law, summoning and dissolving Parliament, serving as titular commander-in-chief of the armed forces, and representing Canada abroad. Simon will be duty bound to defend the operation of the racist Indian Act, and all legislation, however harmful it is to the interests of Indigenous people.

Anger over systemic oppression is a rising tide. Statues of MacDonald, Ryerson and Queen Victoria toppled. Across the country some two dozen Catholic churches near former Residential Schools have been burnt to the ground.

A much more inspiring development than the appointment of an Inuit GG is the election of Rose-Anne Archibald as Grand Chief of the Assembly of First Nations on July 8. Archibald, chief of the Taykwa Tagamou Nation in Ontario, is the first woman to lead the AFN, which represents 634 First Nations with 900,000 members. After five rounds of voting, she defeated several male rivals, and promptly demanded implementation of the 94 calls to action of the Truth and Reconciliation Commission, including restitution for the families of victims of the Residential Schools.

But restitution for Indigenous people must entail expropriation of the wealth of the oil, gas, mining and forestry corporate giants who plundered trillions from the commonwealth of First Nations.

And concerning the Governor General, why not abolish it, as well as the monarchy that the office so dutifully represents?

Ottawa spent over $50 million (including Julie Payette’s salary of $300,000) on the office in 2018. That is to say nothing of the cost borne by each province to maintain a resident lieutenant governor who performs the same pointless ceremonial functions.

It’s not hard to think of many better things on which to spend the money. How about housing the homeless, providing clean drinking water on reserves, or improving public health care?

Worried about who will cut ribbons at a grand opening, issue new coats of arms, or serve tea to the PM? Richard Wagner, the Chief Justice of the Supreme Court of Canada, seemingly performed the duties of the Governor General since January.

Wouldn’t it be supremely better to abolish the Governor General position, terminate the presence on Turtle Island of the oppressive, blood-soaked British monarchy, and while we’re at it, dispense with the appointed Senate? The NDP has long been for that, and now that former labour leader Hassan Yussuff occupies a seat there, there’s one more good reason for Senate abolition. Remember that the Upper Chamber was created in 1867 to protect the men of property. Canada’s first prime minister, John A. MacDonald, put it this way: “The rights of the minority must be protected, and the rich are always fewer in number than the poor.” (Confederation, Joseph Pope, 1895)

Though labour bureaucrats and NDP parliamentarians are loath to ponder it, when the working class takes charge, it will surely sweep aside the feudal remnants and all the parasites clinging to this malignant system. Call it socialist reconciliation. 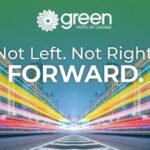 Turmoil in the Green PartyUncategorized 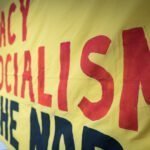 What a Socialist NDP Election Platform Would Look LikeUncategorized