By NDP Socialist Caucus
Posted March 30, 2016
In Uncategorized
Team for Democracy and Socialism in the NDP Question and Answer2016-03-302016-04-07https://ndpsocialists.ca/wp-content/uploads/2015/11/Socialist-Caucus-Logo.pngNDP Socialist Caucushttps://ndpsocialists.ca/wp-content/uploads/2016/03/Team-for-Democracy-and-Socialism-Group-Photo-Final.png200px200px

What is the SC stance on the Leap Manifesto?  Is Environmentalism a Major Part of the SC Program?

We support the Leap Manifesto and the policy resolution backing it. Socialists will be working diligently at the convention to put it at the top of the priority list for floor debate. The SC refuses to stand idly by while the party establishment tries to sideline the issue by substituting a ‘study’ of the question.

The SC has related resolutions that need to be pushed ahead at the same time. Such as:

We contend that in order to realize a major and rapid shift away from GHG-emitting carbon-based systems, and to end reliance on nuclear energy, an NDP government will have to conscript the immense wealth and capital of the giant oil and gas companies in order to fund and implement an emergency transition to safe, clean, renewable energy generatio

We believe that it is necessary to make the polluters clean up their mess, and for society to redefine the cost of doing business.

Are you Trying to “Take Over” the NDP with this Slate?

We are contesting a relatively small number of seats on the party’s leading bodies. The Socialist Caucus is running a team of wonderful, exciting, articulate and dedicated candidates for NDP Federal Executive and Federal Council positions in order to give members a voice and give delegates a choice for a few positions to be elected at Edmonton. We are focused on policies, not personalities.

In fact, the SC team of candidates will pose a very credible left wing challenge to the party establishment. We have grown beyond our expectations, and we are pleased to be working in partnership with Momentum.

We strive to bring socialist ideas to our labour party, to fight inequality, environmental destruction, austerity and capitalism. We want to build the socialist movement here, as our friends are doing in Britain, the USA and beyond.

Why are There so Few Women on the Socialist Caucus Team?

Women, youths and minorities have been the hardest hit by the economic recession and capitalist austerity measures. Many NDP women support our efforts to put Democracy and Socialism back into the party, but we found that many cannot afford the travel expenses, hotel/accommodation costs and convention registration fees to attend the gathering in Edmonton and be candidates for NDP federal executive and council.

The Socialist Caucus has consistently combated these inequalities for decades. We prioritize the struggle for women’s and LGBT liberation. Our candidate for Leader in 2002-03, BC activist Bev Meslo, was then the only female candidate for Leader. We continue to strive for equality by pushing the party to fight for free abortion on demand in every province and in rural areas; an $18/hour minimum wage; a free, quality, national childcare programme; for public Pharmacare fully integrated into Medicare; and for the elimination of post-secondary school tuition and the cancellation of student debt. We say: ensure full rights for migrant workers, build social housing, build the NDP as a Mass Movement of the Working Class and its Allies, particularly the feminist movement.

What do you Stand For?

We stand for a democratic and socialist NDP that fights for workers everywhere. Our policies can be found on the NDP Socialist Caucus website.

Our main objectives are:

What are the Arguments around Leadership Review?

For some, Thomas Mulcair is a proven parliamentarian. His prosecution of Prime Minister Steven Harper in the House of Commons helped to defeat the Tories. But Mulcair’s performance in the electoral campaign did not play so well. Also, Mulcair ignored important social movements, for example, Idle No More, and the huge student and anti-austerity movements in Quebec.

Had he been sensitive, had he clearly supported those movements, inside and outside of the House of Commons, we might not have lost so many Quebec seats. Thomas Mulcair is not sufficiently sensitive to the environment and the needs of indigenous peoples. His position on pipelines is, at best, weak or contradictory. The expansion of the oil and gas industry through new and/or improved pipelines is the opposite of what must be done to save the planet.

During the campaign Mulcair turned a blind eye to issues of race and policing. He advocated increasing the size of the police force in BC. This was at a time when police clashed with Black Lives Matter and have not been accountable for the killings of men like Andrew Loku and Sammi Yatim, not to mention the cops’ ugly role in repression during the G20 Summit in Toronto.

Far too often our indigenous brothers and sisters, as well as other people of colour and minority sectors of the population, bear the brunt of so called Tough on Crime legislation through profiling, or just plain old racism and bigotry. This must stop. Measures to reverse these practices must be initiated and promoted in plain and forceful language.

We need not so much a prosecutor-in-chief, or the managerial style of a political boss, but more someone who is a mobilizer and a motivator. Someone able to connect the NDP to voters and to the extra parliamentary left and social movements, as Jeremy Corbyn has done in the British Labour Party. Thomas Mulcair’s disposition and his ideological background does not lend itself to this very important task.

Mulcair lacks good political instincts. He demonstrated that by imposing, during the campaign, a stubborn emphasis on balancing the budget at a time when, both in Canada and abroad, people recognized that this approach meant more austerity and economic pain to working people and the poor.

It’s true that we can renew the party through policy change and by empowering rank and file members. This process, however cannot be led by Tom Mulcair. He disempowered members by removing the NDP policy book from the party’s web site. He stated that the campaign platform had nothing to do with party policies. The Socialist Caucus asks – then why are delegates gathered at convention? There is something terribly wrong when we try to hide who we are in order to get elected.

Tom Mulcair showed his penchant for a top-down style of leadership by blocking or removing candidates whose views on Palestine were not in sync with his own. Candidates must answer to the constituents they represent. A candidate is nominated by NDP members of the electoral district on a set of principles and a platform. The choice of those members must take precedence, unless there has been gross misconduct. There are many shades of orange. On this matter, the SC defies Mulcair’s attempts to set the tone.

Democratic Renewal has to be accompanied by a change in leadership. Leadership review will compel those seeking to lead to present their views on how to renew the party, and the policies required to make the NDP relevant again. And if we don’t start now by opening a leadership race, it will be too late for 2019! The party cannot do well if it is stuck in this same rut for another four or five years. We need to outflank the Liberal Party on the left, with new policies and new leadership. Canada does not need two Liberal parties. It does need ONE working class, democratic and socialist party.

Why does the Socialist Caucus Oppose Construction of a West to East pipeline? 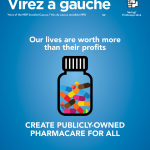 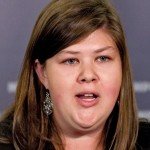