1. Call to order at 12:15 p.m. by Socialist Caucus Treasurer Elizabeth Byce, in the chair.

2. The chair stated recognition of the fact that the meeting was taking place on Indigenous territory. She asked everyone to rise and observe a moment of silence to honour the recently departed leader of revolutionary Cuba, Fidel Castro Ruz, and also the female victims of the Montreal Massacre of 1989.She later noted that meetings of the Socialist Caucus, in cooperation with Momentum, were taking place on the same day in St. John’s NL and Vancouver, BC.

3. The chair outlined the agenda, which met with approval.

5. Michael Chessum spoke for about 40 minutes, giving an excellent overview of the crisis in British society, economics and political life that gave rise to mass protests and a resurgence of radicalism in the Labour Party. His talk was followed by questions and comments from the floor. This segment concluded with a standing ovation. Video of the proceedings is posted on the SC website.

6. NDP Federal Leadership Race, with an introduction by SC co-chair Barry Weisleder. Extensive discussion followed. Moved/Carried (voting in favour were all present, minus one) That the Socialist Caucus and Momentum officially endorse the Draft Sid Ryan website platform and campaign.

Old resolutions re-affirmed, except as follows:

Singing of the Red Flag and the Internationale. Adjournment at approx. 4:30 p.m. 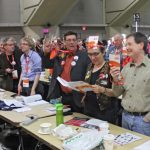