Fifty-five thousand education support workers, members of CUPE Ontario School Boards Council of Unions, took mass strike action, labelled illegal, on Friday, November 4 after the Ontario Conservative government of Premier Doug Ford passed Bill 28. The draconian provincial law banned job action before it occurred, and it invoked the Canadian Constitution’s notwithstanding clause to override Charter rights to bargain freely and to strike. It also imposed wages and conditions on the workers without any further negotiations or arbitration.

In response, massive labour protest action included well over 10,000 CUPE members and allies who rallied at Queen’s Park, and thousands more at MPP constituency offices across the province. It was organized in just four days. An emergency rally in front of Ministry of Labour offices at 400 University Avenue on November 1, followed by a boisterous march to the Legislature at Queen’s Park, led to inspiring actions at Queen’s Park on November 4 and 7, as well as a blockade by hundreds at Yonge and Dundas on November 5. This prompted many activists to demand a general strike, even during the speeches of union leaders. OPSEU/SEFPO Sector 3 walked off the job and engaged in an illegal solidarity strike in support of CUPE Ontario workers. Unions from across Canada pledged millions of dollars in support of the low-wage school support workers.

Clearly, CUPE-Ontario and labour allies forced Doug Ford to back down. The Premier’s last minute, unexpected promised to rescind Bill 28 was a major victory for the working class and the labour movement. It occurred just hours prior to a planned announcement of a huge protest action to take place at Queen’s Park on Saturday, November 12, and a province-wide general strike to begin Monday, November 14. Ford’s retreat resulted in plans for action being put on standby.

CUPE members and allies who mobilized have been changed by events — for the better. Workers across the province, many of whom had never attended a union meeting, much less a mass protest in defiance of an unjust law, supported the workers against the government. Unionized workers demanded more action by their union leaders, particularly in the Ontario Secondary School Teachers’ Federation and the Elementary Teachers Federation of Ontario. Workers demanded mass action and a general strike to challenge Ford and his education minister Stephen Leche. There is a palpable hunger for mass actions and displays of solidarity. It became clear that the Doug Ford government had bitten off far more than it could chew.

At the same time, Ford’s advisors saved him from an even greater setback, which would have resulted in the first general strike, involving both private and public sector union, since the Ontario Days of Action in 1995-96, and the cross-country Day of Protest against federal wage controls on October 14, 1976. On the agenda was a strike that would occur during a period of high inflation and low wages, at a time of distrust of authority and disdain of government, a strike which could have resulted in the complete shutdown of the economy, province-wide, with its potential spreading further. In his arrogance, Doug Ford had painted himself into a corner. He had to eat crow in front of millions of Ontarians on live TV, forced to promise to rescind his pet project – to undermine collective bargaining rights. No doubt every provincial government and every political party watched this episode of Ford’s over-reach and his clumsy incompetence, and will remember it well.

Once the pledge to rescind Bill 28 in its entirety was received in writing from the Premier, Laura Walton, bargaining chief of the CUPE OSBCU, announced that the labour movement had won the battle against Bill 28, and as a sign of good faith, she said, the strike would end and the union team would return to the bargaining table. When asked by a reporter if plans were in the works for a general strike, CUPE National President Mark Hancock was coy. He joked, urging the scribes to buy his book after he retired. Hancock did not mention that the labour movement leadership held an emergency meeting, with 50 participants from public and private sector unions, where they decided unanimously to plan a mammoth protest for November 12, to be followed by a province-wide general strike on November 14. Don’t workers deserve to know the truth?

The throng of thousands in front of the Legislature on November 7 cheered the retreat by Ford, but as for the announcement that picket lines would be collapsed, not so much. The scene quickly transformed from adulation to stunned silence. A mixture of stunned glances and grumbling acceptance that, for the time being, workers had at least won a major battle in an ongoing war against the employer. Of course, there is a risk that, in the coming days and weeks, momentum will dissipate as CUPE members go back to work, frigid weather arrives, and the bargaining team pursues negotiations with a boss who has proven to be obstructionist and intransigent. Was this situation avoidable? If CUPE-Ontario had continued its strike, demanding to see a new and improved offer before a return to work, what would have happened?

The focus of most unions, at least at the top, was on the undemocratic nature of Bill 28 and the notwithstanding clause. The latter would impact every union across the country, not to mention every equity seeking group which would be under threat of a sharp rise in basic human rights violations, with violators unimpeded by the Charter of Rights. While all labour affiliates were in support of decent wages and fair working conditions for CUPE OSBCU workers, would they have agreed to engage in a province-wide general strike on that issue alone? This writer, who attended the news conference of union heads, learned that CUPE-O, UNIFOR, the Steelworkers Union and OPSEU/SEFPO indicated a willingness to go out on a province-wide general strike, or a form of days of action, if CUPE had decided to continue its strike. But in the end, it was the call of CUPE OSBCU. (Were the grass roots members consulted?)

If Ford had not rescinded the bill, the experience of a general strike would have built confidence and stoked much needed solidarity across the working class in Canada’s most populous province. It is possible that demands could have been expanded well beyond opposition to Bill 28 and to insist on better working conditions, including the rescission of Bill 124, the enactment of higher wages for all workers, including a $25/hour minimum wage, democratic electoral reforms – and the removal of Doug Ford as Premier. Such a scenario would galvanize the left as a mass movement standing against the rising right wing, including in opposition to the reactionary anti-social, anti-science, anti-immigrant Convoy forces. Potentially, everything progressive could be put on the table.

CUPE education workers are now in a position somewhat similar to prior to going on strike. However, they are in a better bargaining position with huge levels of public awareness and support. It is much less likely that anti-strike legislation will be deployed against them. If the workers don’t achieve a satisfactory deal they can resume strike action, or accept binding arbitration – the latter being a bureaucratic process that empowers workers much less than free collective bargaining.

What about the decision of the Ontario Labour Relations Board on the basic legality of the strike / protest by CUPE members? With the repeal of Bill 28, that will probably remain a mystery.

In any case, solidarity remains vital. OPSEU/SEFPO leaders have informed members and allies that it remains “in standby,” ready to resume solidarity action when needed. An all-leaders meeting will take place, convening representatives of its 180,000 members to review what has occurred and to plan for the future. Activists should not feel demoralized at the absence of a total victory. Instead, celebrate the defeat of Bill 28, learn from the methods used to get there, and continue to prepare for the general strike. As OPSEU President JP Hornick said at the news conference, “We are pleased to have Ford’s commitment, but OPSEU/SEFPO is not standing down — we are standing by.” “When you come for one of us, you come for all of us.” “Workers united can shut this province down!”

Thanks to the action by rank-and-file members and allied activists, we are now closer to a general strike than we have been for a long time. Keep up the organizing and prepare to Dump Thug Ford with a General Strike!

– Julius Arscott is a member of the Executive Board of the Ontario Public Service Employees’ Union / SEFPO, a spokesperson for the Workers’ Action Movement (WAM), and a leading member of Socialist Action / Ligue pour l’Action socialiste. 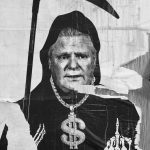 For a General Strike to Dump Thug FordUncategorized 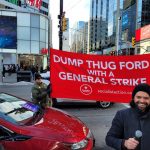 Photos of Solidarity at Yonge and Dundas, Toronto on November 19Uncategorized