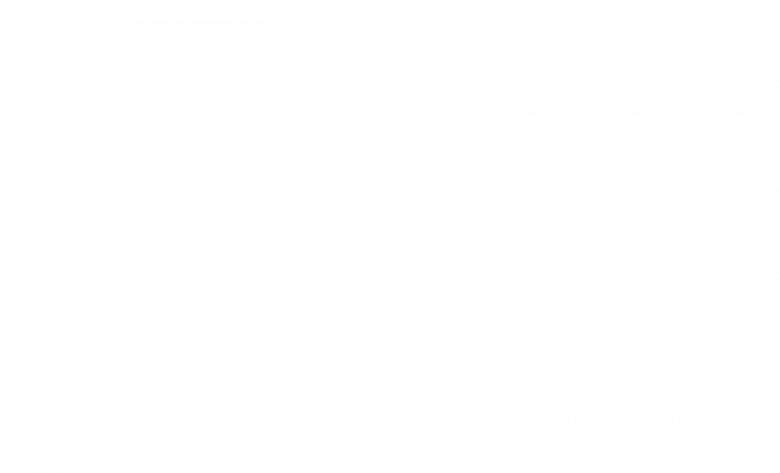 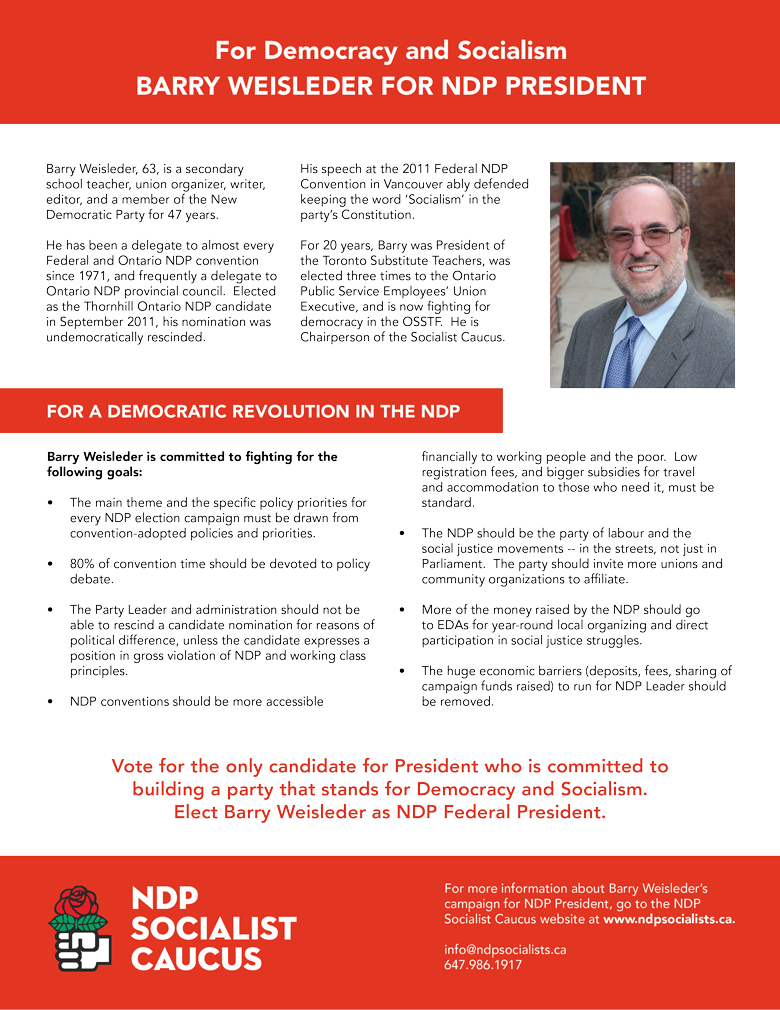 Barry Weisleder, 63, is a secondary school teacher, union organizer, writer, editor, and for 47 years, a member of the New Democratic Party. He has been a delegate to almost every Federal and Ontario NDP convention since 1971, and frequently a delegate to Ontario NDP provincial council. Elected as the Thornhill Ontario NDP candidate in September 2011, his nomination was undemocratically rescinded.

His speech at Vancouver in June 2011, “Socialism is a Rocket,” ably defended the ‘S’ word in the NDP Constitution.

For 20 years Barry was President of the Toronto Substitute Teachers, was elected three times to the Ontario Public Service Employees’ Union Executive Board, and is now fighting for union democracy in the OSSTF. He is a founder of the Workers’ Action Movement and is Chairperson of the NDP Socialist Caucus.

For a Democratic Revolution in the NDP

Win, lose or draw, Barry is committed to fight for the following goals:

The main theme and the specific policy priorities for every NDP election campaign must be drawn from convention-adopted policies and priorities.

80% of convention time should be devoted to policy debate.

The Party Leader and administration should not be able to rescind a candidate nomination for reasons of political difference, unless the candidate expresses a position in gross violation of NDP and working class principles.

NDP conventions should be more accessible financially to working people and the poor. Low registration fees, and bigger subsidies for travel and accommodation to those who need it, must be standard.

The NDP should be the party of labour and the social justice movements — in the streets, not just in Parliament. The party should invite more unions and community organizations to affiliate.

More of the money raised by the NDP should go to EDAs for year-round local organizing and direct participation in social justice struggles.

The huge economic barriers (deposits, fees, sharing of campaign funds raised) to run for NDP Leader should be removed.

For Democracy and Socialism, in Canada and Beyond

The NDP is the party of labour, the working class, women, youths, seniors, indigenous peoples, and the disempowered and oppressed across Canada.

Leftist NDP members are blocked from seeking nomination, or once nominated, have the candidacy rescinded. I have first-hand experience with that kind of bureaucratic fiat from on high.

There is insufficient time to debate and vote on policy. Convention has been reduced to an elaborate fund raising exercise, and a platform for bourgeois ‘experts’ and self-congratulatory videos.

Socialism is marginalized in the party constitution and excluded from the election campaign, even while radical ideas are gaining a huge audience in Britain, in the USA, and beyond. This is no time to mince words — just as the world is a prisoner of permanent recession, permanent war, and our planet is hurtling towards environmental catastrophe.

Can one person elected to the office of President of the NDP set things right? No. So, who can? Only the grass roots members and labour affiliated ranks of the party can wage the struggle for Democracy and Socialism to victory, to win a Workers’ Agenda.

So, why run for President? To give members a voice, to give delegates a choice, to keep hope alive.

If you want more of the same, vote for the establishment candidates. But if you want to turn the NDP to the left, along the line of the 29 socialist resolutions circulated across the country since December, then vote for the Socialist Caucus candidates.

If you want political action consistent with the 4 Ps Petition the SC promoted in the summer and fall, for Pharmacare, for Progressive Taxation steeply applied to big business and the rich, for Palestine and BDS against the Zionist apartheid state, and for an end to Pipeline construction linked to a decisive move towards green energy alternatives, funded through the nationalization of Big Oil and Gas, then the path forward is very clear.

Vote for the only candidate for President who is committed to that path, someone who will organize the membership, every day of the year, for Democracy and Socialism. Elect Barry Weisleder as NDP Federal President. Join the Socialist Caucus and build a movement to turn the NDP sharply to the left. 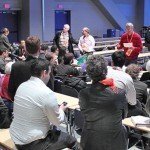 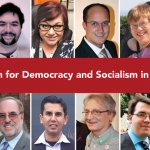 The Team for Democracy and Socialism in the NDPUncategorized