Michael Chessum is a member of the Momentum Steering Committee and has been a socialist activist in and around the Labour Party for a number of years. He was previously an organiser in the student and anti-austerity movements of 2010 and thereafter. He currently works as the national organiser for Another Europe is Possible, which was the radical Remain campaign in the EU referendum, and writes for the New Statesman, Guardian and other publications. (Michael will also speak in Hamilton, Ontario on December 12.)

12 noon Keynote speech by guest from Britain, followed by questions and answers

5 p.m. Other business. Singing of the Red Flag. Adjournment to the Duke of York pub. 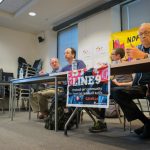 Report on Joint NDP Left Meeting in Toronto on May 26Events 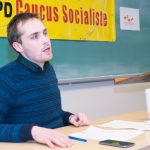