For over forty years, Jeremy Corbyn and the left wing of the British Labour Party (BLP) strongly opposed the European Union (E.U.). They opposed joining it. They opposed remaining in it. Was that stance a concession to racism? Not at all. Not any more than opposing imperialist war is a concession to isolationism, or a sellout to capitalists who profit from building homes, instead of bombs. The European Union is a monstrous machine of corporate rule, not a humanitarian refuge. Opposition to it was, and continues to be an essential basis for popular sovereignty and a Workers’ Agenda. The retreat by Corbyn and the BLP into the pro-EU swamp largely explains Labour’s devestating electoral setback on October 21, 2019. (Voters in 53 of the 59 seats that Labour lost had earlier voted to Leave the E.U.)

Why discuss this now? Because reversing that stance will be key to resisting the Tory agenda, towards mobilizing the working class in mass action for a socialist alternative.

First, let’s be clear on the history.

From the very beginning, the left within the labour movement opposed the “European project” because it saw it as a weapon to be used by Capital internationally, including in every European country.

In the 1975 referendum, Jeremy Corbyn opposed Britain’s membership in the EEC. He also opposed ratification of the Maastricht Treaty in 1993. At the time Corbyn said: “The whole basis of the Maastricht Treaty is the establishment of a European Central Bank which is staffed by bankers, independent of national governments and national economic policies, and whose sole policy is the maintenance of price stability. (…) That will undermine any social objective that any Labour government in the United Kingdom – or any other government – would wish to carry out. (…) The Maastricht treaty does not take us in the direction of the checks and balances contained in the American federal constitution. It takes us in the opposite direction of an unelected legislative body – the [European] Commission – and, in the case of foreign policy, a policy that will be, in effect, imposing foreign policy on nation states that have fought for their own democratic accountability.”

In 2008, Jeremy Corbyn opposed the Lisbon Treaty. In 2011 he backed a proposed referendum on British withdrawal from the E.U. And he correctly argued, during the 2015 crisis in Greece, that the E.U. allowed financiers to destroy the Greek economy.

How and why did Corbyn and the Labour left retreat from this position? They did so under relentless pressure from the Tony Blair-led right wing of the BLP, and from British big business, to which the Blair-ites are tied by a thousand threads. The latter seek to permanently block socialist policies. The undemocratic E.U. helps them to do it.

On June 23, 2016 the British people, particularly the British working class voted to leave the European Union. It was a mandate delivered by the working-class majority. The Labour Party leadership turned its back on that mandate. By doing so, it gave Boris Johnson, the Tories and the Brexit Party a huge gift. The right wing quickly monopolized the anti-establishment sentiment of the primary victims of capitalist globalization and EU-backed austerity measures. Of course, the right wing stoked anti-immigrant, racist opinion. Sadly, Corbyn and the BLP did little to counter it, except to echo liberal arguments for greater ease of foreign travel – while hoping that the issue of Brexit would simply fade away. Instead, Brexit become a ‘democratic’ cause. Millions of traditional Labour voters felt that they had been slapped in the face by their own party.

Did the ‘Remain’ camp, which Corbyn half-heartedly and confusedly joined, demand that racist Fortress Europe lift its barriers to people from Africa, the Middle East and Asia who are displaced by war and catastrophic climate change? Did the ‘Remainers’ campaign to drastically cut military spending, bring the troops home, and nationalize the carbon-based energy industry towards a quick conversion to green power? Of course not. The E.U. would never tolerate such a threat to the capitalist bottom line, and the pro-Remain forces (especially the Blairites) are, above all, devoted to capitalism.

There is a ‘Remain and Reform’ position. It contends that to change the E.U.’s framework and directives that allow employers to hire workers on zero-hour, fixed-term and temporary contracts instead of permanent contracts, before anything can be done in the U.K., it will be necessary to convince 27 other E.U. member states to repeal the directives which spread and entrench insecure work. But how likely is that to happen? When did the E.U. ever volunteer to grant genuine labour rights, rather than heightening exploitation? The fact is that every working class gain has been the result of class struggle – in Britain, the rest of Europe and around the world.

The relationship of the United Kingdom to the European Union is not an abstract matter. Working people in Greece can tell you what the E.U. meant to them when it ravaged their wages, pensions, social services and popular sovereignty. That is what any leftist government in Britain would face if it attempted to implement socialist policies like public ownership of rail, water, electricity and the post office. Those pledges, along with a Green New Deal, universal broadband, raising the minimum wage, scrapping university tuition, and abolishing private schools, were exceedingly popular elements of Corbyn’s platform.

Presently, Britain is leaving the E.U., which is good. One less obstacle will stand in the way of workers who want anti-capitalist change. Unfortunately, they are saddled with the Boris Johnson government, the most reactionary Tory regime since Margaret Thatcher. Again, that is largely due to the BLP’s muddled position on Brexit, calling for a second referendum, and handing the right wing a monopoly on clear opposition to the E.U. Johnson enjoys a commanding majority of seats in Parliament, despite gaining only 43.6 per cent of the votes cast. However, he can take little comfort in the vagueries of the undemocratic first-past-the-post electoral system because of the deepening schism with Northern Ireland and Scotland. The U.K. is disintegrating. That too is good for workers and the oppressed worldwide – an unintended consequence of Brexit for the reckless right wing.

The challenge facing the British working class is to organize and mobilize against the vicious attacks expected from the Tories. Those attacks will include a new Withdrawal Agreement Bill, which largely reiterates the European Union (Withdrawal) Act 2018. The latter enables the transposition of all directly-applicable EU law since 1973 into UK law. The anti-working-class provisions of the Maastricht and Lisbon Treaties, which impose “free and undistorted competition” and prevent state aid and direct public ownership, will remain U.K. law. To survive, unions will have to lead the effort to smash these surviving measures of the E.U.

The BLP will have to become, for the first time in its checkered career, a party of the streets, acting boldly in concert with unions and mass social justice campaigns. Momentum, the vast anti-capitalist movement that brought over 450,000 new members into the BLP after Corbyn won the leadership in 2015, can lead this effort. It can also ensure that the successor to Corbyn will be a leftist like Rebecca Long-Bailey, and not a conservative toady like Keir Starmer, Lisa Nandy or Emily Thornberry.

But there is much, much more to be done. Corbyn was demonized by the bourgeois media, and bedeviled by his retreats on Palestine, Zionism, nuclear weapons and NATO. He appeared as a weak and indecisive leader. More tellingly, he was undermined by the Labour Party right wing. Boris Johnson, who also faced internal treachery, showed a solution. He kicked his political opponents out of the Conservative parliamentary caucus. Sadly, Corbyn tolerated his Blairite enemies, instead of encouraging the left to remove them by means of a thorough, democratic, country-wide de-selection process at the local level. Momentum and the Labour left cannot afford to forgoe this task now. The precondition for it is winning the party to unambiguous eco-socialist policies. Such policies must include a radical break with the Remain camp, a firm rejection of the Rejoin group now being organized around Kier Starmer, and an embrace of internationalism that rejects both capitalist Europe and corporate America. The task is to forge unity with European workers, not European states. This platform should be combined with mass job action to stop Tory attacks and to establish a Workers’ Government. The ongoing strike wave in France, the millions protesting against austerity and repression, from Chile to Lebanon to India, show clearly that class struggle is high on the agenda.

The BLP is unlikely to be the instrument of workers’ insurrection. But the fight for revolutionary leadership of the British working class will likely pass through the Labour Party on the road to the construction of a class struggle left wing and a revolutionary workers’ party. That is what it will take to settle accounts with both Crown and Capital, once and for all. 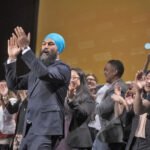 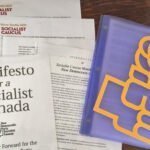