Peter Kormos (1952 – 2013), Niagara Regional councillor, and for 23 years the NDP MPP for Welland, was an outstanding fighter for the working class, the poor and the disenfranchised. He was a person of principle who openly identified as a socialist. He fearlessly stood up to corporate foes, and to traitors to the cause, including inside his own party.

It was a pleasure to work on his campaign for Ontario NDP Leader in 1996, and alongside him on many other worthy causes over the years. Peter will be sorely missed. Our sincere condolences go out to his family and to his vast legion of comrades and friends. 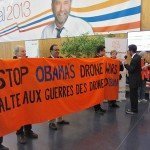